Terrifying footage shows Mexicans running for their lives as drone... 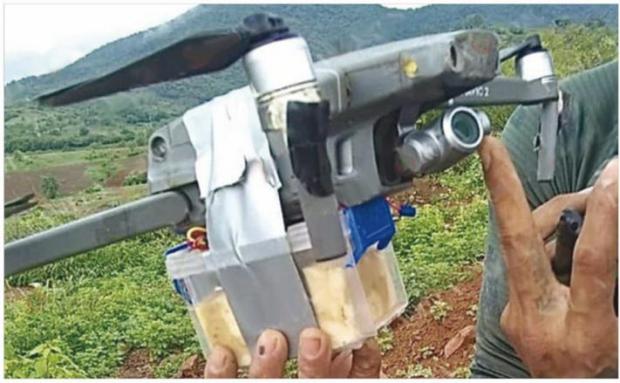 This is the terrifying moment a drug cartel used drones to drop explosives on unsuspecting inhabitants in the forests of Tepalcatepec, Mexico, in the latest demonstration of unchecked violence in the region.

People were sent running for their lives on Monday as the drones, controlled by the Jalisco New Generation Cartel (CJNG), soared over their shacks before raining down explosives on the forest floor in the state of Michoacan.

The shocking footage shows an aerial view of a dense jungle where a blue tarpaulin is hung up covering a series of what appear to be makeshift shacks or huts.

Seconds later, a bomb explodes and a number of people can be seen scrambling away from the blast in search of safety as coils of smoke begin to rise from the forest floor.

The drone then lets loose more explosives on the survivors before being shot down by the forest's inhabitants.

The attack represents the latest in a series of brutal assaults on the population of Michoacan which has played host to escalating violence, mostly attributed to the CJNG.

The footage from Monday's attack emerged just weeks after the nearby city of Chinicuila in Michoacan reported that roughly half of its population fled, many illegally into the US, to escape the cartel's violence.