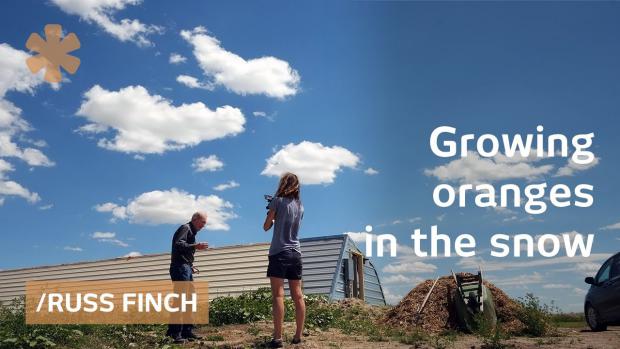 Winter temperatures in Alliance, Nebraska can drop to -20°F (the record low is -40°F/C), but retired mailman Russ Finch grows oranges in his backyard greenhouse without paying for heat. Instead, he draws on the earth's stable temperature (around 52 degrees in his region) to grow warm weather produce- citrus, figs, pomegranates - in the snow.

Finch first discovered geothermal heating in 1979 when he and his wife built it into their 4400-square-foot dream home to cut energy costs. Eighteen years later they decided to add a 16'x80' greenhouse in the backyard. The greenhouse resembles a pit greenhouse (walipini) in that the floor is dug down 4 feet below the surface and the roof is slanted to catch the southern sun.

To avoid using heaters for the cold Nebraska winter nights, Finch relies on the warm underground air fed into the greenhouse via plastic tubing under the yard and one fan.

Finch sells a "Citrus in the Snow" report detailing his work with his "geo-air" greenhouses and says anyone can build a market-producing greenhouse for about $25,000 or "less than the cost of a heat system on a traditional greenhouse".