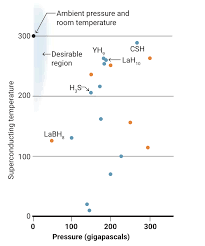 Theorists have predicted other hydride compounds which could work at lower pressures. There is race to find versions stable at ambient pressure and room temperature.

In 2004, Ashcroft suggested that adding other elements to hydrogen might add a "chemical precompression," stabilizing the hydrogen lattice at lower pressures. The race was on to make superconducting hydrides. In 2015, researchers including Mikhail Eremets, a physicist at the Max Planck Institute for Chemistry, reported in Nature that a mix of sulfur and hydrogen superconducted at 203 K when pressurized to 155 GPa. Over the next 3 years, Eremets and others boosted the Tc as high as 250 K in hydrides containing the heavy metal lanthanum. Then came Dias's CSH compound, reported late last year in Nature, which superconducts at 287 K—or 14°C, the temperature of a wine cellar—under 267 GPa of pressure, followed by an yttrium hydride that superconducts at nearly as warm a temperature, announced by multiple groups this year.