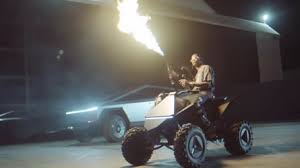 We've been covering Rich Rebuilds' Tesla Cyberquad project since the start and it's definitely progressing. The road until it's finally finished is still long, though, but in the latest video, he mounts the battery pack and motor onto the frame; both were sourced from a scrapped Zero all-electric motorbike.

The quad's frame is the exact same one that Tesla used to create the Cyberquad that was ridden onto the bed of the Cybertruck during the latter's reveal event, the frame from a Yamaha Raptor 700. And, according to Rich, he thinks Tesla also used a Zero motor to power its Cyberquad, although the battery pack used may have been slightly smaller.

There's still a lot to do to complete this build, though and it will be interesting to see what Rich and his team do to mask the bulky battery pack that sits where the Yamaha's gasoline burning engine used to be. It does stick out a bit, but making it disappear under the planned stainless steel body shouldn't be a problem.