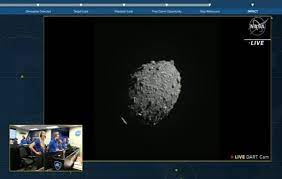 NASA's asteroid smashing spacecraft completed its spectacular doomed attack on a distant asteroid last night, and we already have three awe-inspiring videos of the event.

DART recorded and beamed back its final moments with its onboard Didymos Reconnaissance and Asteroid Camera for Optical Navigation (DRACO), which was also responsible for automatically navigating the spacecraft onto its collision course. As DART came ever closer to the space rock, its camera feed showed the asteroid's landscape bloom from a single pale gray pixel to a rough and craggy terrain strewn with sharp, shadowy rocks.

"We saw that we were going to impact. This asteroid was coming into the field of view for the first time. We really had no idea what to expect," Elena Adams, a mission systems and the spacecraft systems engineer for the DART mission, said at a news conference (opens in new tab) after the event. "All of us were kind of holding our breaths."