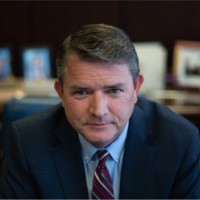 Maricopa County Supervisor Bill Gates, who helped cover up the Fraudulent 2020 Election, recently said the 2022 Primary Election in Arizona was a "catastrophe," but not because of the mass voter irregularities or the massive amount of time it took for Maricopa County to count the ballots.

Instead, RINO Bill Gates said the slate of Trump-Endorsed candidates is "frightening" and suggested that they need to lose the General Election.

Bill Gates and the corrupt Maricopa County Supervisors defied legal subpoenas and fought against the full forensic audit of Maricopa County's 2020 Election every step of the way. The audit discovered hundreds of thousands of illegal, fraudulent, or questionable ballots and that Maricopa County illegally deleted elections files.

Numerous election security issues were not corrected before the 2022 Primary Election, and many of the same problems arose.

The Gateway Pundit reported on the massive voter fraud concerns and voter irregularities that occurred to Republican voters on primary election day in Maricopa County and across the State.