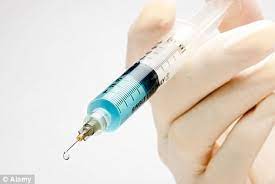 The treatment is far less invasive than other surgeries, and has been given FDA approval.

Spinal discs play an important role in cushioning the vertebrae, but as with many parts of the body they begin to wear out with age. In many people, the fluid filling of the discs can dry up or leak out, causing pain and affecting mobility. Unfortunately, treatments are largely limited to care like rest, physical therapy and painkillers, or in more severe cases, surgery where discs are removed or replaced with prosthetics.

But recently, scientists have developed a new option – a hydrogel that can be injected into the spine where it fills in cracks and tears in the affected disc, restoring some of its cushioning to alleviate pain. Developed by the medical company ReGelTec, the gel is known as Hydrafil, and in 2020 it received a Breakthrough Device designation from the US FDA. And now the results of the first human trials are in.

The trial involved 20 patients aged between 22 and 69, all of whom had chronic lower back pain from DDD. They had all described their pain as four or higher on a 10-point scale, and all had reported only mild relief from existing therapies.

First, the gel is heated so that it becomes a thick liquid, which is then injected using a 17-gauge needle into the affected discs. When it cools to body temperature, it forms an implant with the same kind of biomechanical properties as the natural disc. The patients were then followed for six months to assess their recovery.

And sure enough, all participants reported improvements to pain and mobility. On a scale of 0 to 10, the average pain level reported fell from 7.1 to 2.0. On a questionnaire about how their lower back pain prevented them from performing everyday activities, their average score fell from 48 down to six.