> Massive LNG tanker sails itself across the Pacific in shipping world first - pirateswithoutborders.com 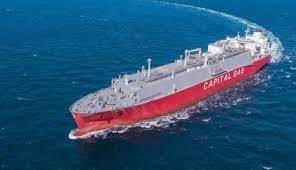 A ship that is capable of sailing itself isn't new. Even the smallest vessel can be equipped with an automatic pilot and it isn't uncommon to come across stories of freighters steaming into harbor without a soul aboard after being prematurely abandoned by their crews. In fact, even a sailing craft without a single bit of electronics aboard can keep a steady course if the sails are set properly and the tiller secured.

However, that is a very different thing from an autonomous ship making a passage. An automatic pilot simply allows a craft to maintain a heading and maybe it can be programmed to respond to things like GPS waypoints and currents, but an autonomous ship must be able to handle many different kinds of sensor readings and to not only make decisions about how to respond to them, but to do so in accordance with the rules of the road and maritime law.

Which brings us to the Panama-flagged Prism Courage. The ship left Freeport, Texas on May 1, 2022, then passed through the Panama Canal and crossed the Pacific Ocean to arrive at the Boryeong LNG Terminal in South Chungcheong Province, Korea, after a voyage of 33 days.

During the latter half of the journey, the ship was under the control of the autonomous navigation system HiNAS 2.0, which not only steered it, but sought out the optimal routes and best speeds based on Hyundai Global Service's Integrated Smartship Solution (ISS) artificial intelligence. This provided navigation as well as compensation for weather and wave heights and legally avoiding passing ships by steering in real-time.