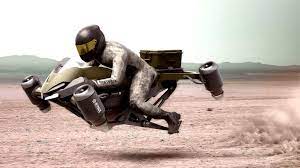 At the Draper Venture Network CEO Summit in California, the Speeder made its debut under JetPack Aviation's new Mayman Aerospace brand, which has been established to develop micro VTOL Speeders to suit a range of applications.

About the size of a motorbike, the P2 Speeder is the third full-scale prototype the company has produced on the path to a final aircraft. It is powered by eight jet engines that run on regular Zero Net Carbon or Sustainable Aviation Fuel (SAF), with an eye-catching glossy angular carbon fiber body and ergonomic pilot position designed for aerodynamic performance to maximize flight efficiency.

Safety is also obviously a major focus, with a proprietary onboard computer system that instantly rebalances engine thrust in the event of engine trouble. Ease of use is also front of mind, with getting into the air intended to be as simple as jumping on and hitting the start button.

While the prototype on show was of the piloted variety, the Speeder features a modular design and can also be configured for autonomous or remotely-piloted flight. While it is being targeted at police, rescue and military applications as a small VTOL personal aircraft, autonomous or remotely piloted configurations would massively expand the potential applications for the aircraft.

Such applications include firefighting, where it could carry retardant in quick-load twin tanks and dump or spray the contents in rough terrain or onto tall targets as required, and emergency medevac, where patients could be strapped to a rapidly detachable litter for speedy transport to hospital. It could also serve as an industrial cargo transport, with the ability to fly in cargo mode for 400 miles (644 km) at over 500 mph (805 km/h) while carrying loads up to 1,000 lb (450 kg).