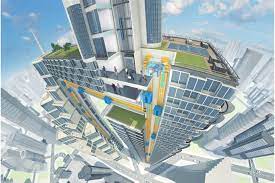 The concept is simple enough: excess renewable energy can be stored as potential energy, by using it to lift something heavy up to a higher point. That energy can then be released by using gravity to drive some kind of generator. Researchers from the International Institute of Applied Systems Analysis (IIASA) in Vienna, Austria, looked at the height and location of skyscrapers and saw a huge amount of pre-built energy storage waiting to be unlocked.

The Lift Energy Storage System (LEST) would make use of the existing elevator systems in tall buildings. Many of these are already designed with regenerative braking systems that can harvest energy as a lift descends, so they can effectively be looked at as pre-installed power generators. The LEST would also make use of vacant spaces throughout the building, ideally close to the top and bottom. Thus, it could be remarkably cheap to retrofit this kind of capability to a building, as compared with building a dedicated gravity battery system anywhere else.

Basically, the LEST would take advantage of any elevator downtime, by moving heavy items – like big containers of wet sand – from the bottom of the building up to the top, when excess renewable energy is available, and from the top to the bottom, when that energy can be used or sold back into the power grid.

The IIASA team has proposed building a series of autonomous trailer robots for the job of picking up the weights and towing them in and out of the lifts where it's prudent. They can either be stored along the corridors, or in empty apartments or offices, or potentially in dedicated out-of-the-way spaces should a building be planned with this system in mind – a spare half-floor near the top or bottom of a building could conceivably do the job, since it wouldn't be necessary to have a ceiling high enough for people to walk around.