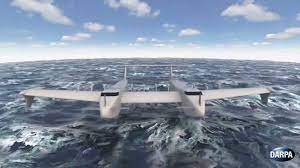 Prototypes could fly as early as 2027.

The wing-in-ground effect has seen a bit of a mini revival over the last few years. There are a few players trying to get ground effect vehicles (GEVs) into commercial circulation – notably Singapore's Wigetworks, with its Airfish-8 and Boston's Regent, which has drawn in considerable funding and pre-sales to build a prototype of its fully electric, 12-passenger Viceroy seagliders.

All of these aircraft, as well as the Liberty Lifter and Russia's famous WW2 Ekranoplan program, aim to make use of a neat bit of physics: when a plane flies very close to the ground – at an altitude less than half of its own wingspan – it can ride on a cushion of high-pressure air between the wing and the surface, gaining additional lift while reducing lift-induced drag. This can make these things extremely efficient – flying at an altitude around 5 percent of the wingspan can get you from A to B up to 2.3 times more efficiently.

DARPA likes the idea because ground-effect seaplanes could get big, heavy cargo from A to B much faster than ships, without the need for large ports, or the enormous runways and ground-based logistics required by large cargo planes. A Liberty Lifter could take off from any given body of water, and put down on any other, without any infrastructure requirements, greatly simplifying the logistics of moving big, heavy military gear around the place.

For the Liberty Lifter program, DARPA is looking for designs that are:

Capable of carrying payloads over 100 tons

Capable of sensing and avoiding large waves, and intelligently handling the takeoff and landing processes accordingly