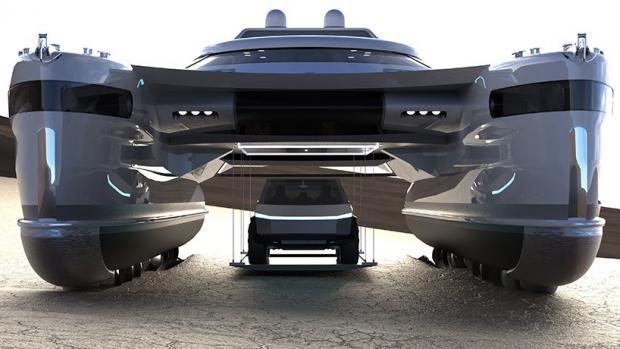 His latest effort, the Air Yacht, is designed to travel the sea or the skies in style, buoyed by twin helium-filled airships.

Eschewing the traditional one-big-balloon blimp design, the Air Yacht looks more like a giant catamaran, with two 492-ft-long (150-m) airships connected via a 262-ft-long (80-m) central deck. The central deck measures 33 ft (10 m) wide and houses a master cabin with 360-degree views, a large dining area and a living area. There are also windows on the outer edges of the airships, each of which contain five en suite staterooms.

Those twin carbon-fiber airships also feature honeycomb "hives" that hold 14.1 million ft3 (400,000 m3) of compressed helium allowing the craft to fly at 60 kn (69 mph, 111 km/h) for more than 48 hours, with eight contra-rotating electric rotors on the sides powered by ultra-light batteries and solar panels adorning the tops of the airships.

The engines would also rotate to push the airship down and land on the water, with depressurization of the helium and ballast anchoring system keeping it on the water, where an "inflatable basement" keeps it afloat and allows it to travel at a speed of 5 kn (6 mph, 9 km/h). There's also room for an optional helipad (and why not!) on the top of the central deck to allow travel to locations that can't accommodate a massive amphibious airship.

Lazzarini isn't targeting tourism operators with the design, but rather private owners. Given the presumably stratospheric price for such a vehicle if it were ever to materialize, that could be a pretty limited market – especially since most billionaires these days seem to be sinking their money into vehicles that go a little higher. Still, none of that stops it being a gorgeous design.