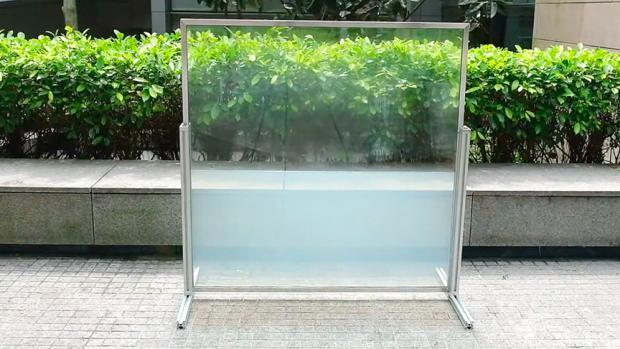 First of all, there are already windows with electrochromic glass, that electronically tints on demand. As the glass gets darker, though, it gets harder to see through. Additionally, although such windows do partially block the visible spectrum of sunlight, they don't necessarily block the infrared spectrum, which produces the heat.

That's where the new material comes in.

Developed by scientists at Singapore's Nanyang Technological University and Israel's Hebrew University of Jerusalem, it consists of an inexpensive mixture of titanium dioxide, tungsten trioxide, neodymium-Niobium and tin oxide. This is applied as a coating to ordinary window pane glass, and connected to an electrical circuit.

When the extra heat provided by the sunlight is wanted, such as during the winter months, the material is left switched off. This allows all of the sunlight's infrared radiation to pass through. During warmer months, however, the power is switched on – simulations have indicated that the material will then block up to 70 percent of the incoming infrared radiation, while still allowing up to 90 percent of the sun's visible light to pass through.

Additionally, whereas existing electrochromic windows reportedly start losing their functionality after three to five years of use, tests involving repeated on/off cycles have shown that the new material should last much longer.

What's more, windows incorporating the technology could also be coated with an electronically switchable film created by the same team, which uses carbon nanoparticles to either conduct or block the passage of ambient heat from the outdoor environment.